As my second ‘Out to Play’ seven week residencies began, (with the whole of Chirnsyde Primary plus Primary 2 & 7 at Merrylee Primary), this blog reflects on some endings and beginnings.

Merrylee, as a large school, had a busy programme of events happening in the final week before the October break, so rather than any parent sharings, I decided to lead an end of project session giving pupils a chance to have fun, share with each other and reflect on their experience. Some of the most touching responses were letters children wrote to our fictional character, Taika, a member of the (factual) Awa Tribe of the Amazon Rain Forest. The end of the first residency of the year allowed Eco Drama to collect in feedback, both formal and informal, from the teacher on ‘Out to Play’ and collect information about children’s views of outdoor drama, stories and play and their relationship to nature and the environment.

This first project was a huge learning curve from my perspective as a drama artist. It was a new challenge to work outdoors and to combine drama, stories and outdoor learning with nature connection, particularly when working with so many different ages of children simultaneously. Due to the school’s keen interest in outdoor learning, there were often several classes enjoying the school’s unique playground facilities at a time. This meant children were accustomed and usually dressed appropriately for outdoor activity, however it also meant being flexible in terms of space, finding ways to combat increased distraction. It was however, highly beneficial to have access to spaces such as the Trim Trail, Outdoor Classroom and Urban Jungle, which not all schools would have access to.

There were many positive quotes taken from Merrylee pupils about looking after our planet, such as:

“I learnt that this world would be better if we all did something to help.” – Rachel, P6

“I have decided to care more about the environment” – Raj, p4

It was also great to hear that the drama and creative side of the project had been beneficial:

“I learned to be more confident when talking” – Katie, P6

Chirnsyde Primary school (and Merrylee’s p2 and p7s) are already coming into week 4 of their ‘Out to Play’ residency. The school has a vast array of outdoor space which we have used our imagination (inspired by Drama Artist Ben’s Playground Mapping ideas from last year’s Out to play Project) to turn into a magical land, including an enchanted forest and a dessert of dreams among others! Being a school with a smaller number of pupils, we’ve also had the ability to somewhat take over the playground, with a bit of sharing here and there.

One of the challenges of so much open space is of course the lovely Scottish weather! Primary seven and Chirnsyde’s janitor and I attempted not one, but two different basic rain shelters built from Tarpaulin. P7 not only creatively worked in pairs to build small animal and insect homes from natural found materials, but worked as a team to create an A-Frame survival style shelter just big enough to huddle under for a photo! This was then turned into a class-sized ‘roof’ shelter but due to the high winds and rain, the shelter is now down after three trips to replace it by the helpful Janitor.  I’m still trying to find new ways to keep on-task while also keeping the children moving as the cold weather creeps further in.

Since beginning the second residencies, we’ve had playground explorers spotting nature using imaginary cameras and packing our bags to go out and have fun.

“Are we going back to the forgotten forest?” – Connor, P2

We’ve had Scottish animal inspired drama, with older groups creating their own animal family meal time scenes, versions of Rudyard Kipling’s “Just so Stories” including a particularly hilarious creation, “How the Duck Got Its Beak” which left the teacher crying with laughter!  We have been going back to basics with imagination (arguably a muscle many modern children don’t get to flex too often) creating puppet-style creatures from rubbish.

“I made a butterfly from Bubble wrap, it’s called a Bubble-Fly” – P3 pupil

We even got into a time-machine and turned into dinosaurs… and then oil… and then plastic.

We’ve had lots of nature songs and games, “I like the flowers, I like the Daffodils…”, The Avocado Haka (traditionally used by the famous Avocado tribe) and energetic games such as ‘Cat and Mouse’ proving very popular. And Chirnsyde’s Primary 5/4 have become fluent speakers in “Pumpkin Language”!

We’ve also had a new friend, Squawky the Parrot (shhhhhh, he’s a puppet but don’t tell anyone!) join me and he is hugely popular with the younger classes in particular, and even has a few admirers up to P7.  Using this puppet has helped bring magic to the sessions and of course a great way of using an animal to talk about important environmental messages.

“Squawky, I love you” (many many children!) I’ve been able to take a lot of inspiration from drama artist Ben, who helped shape the original Out to Play project and wrote a resource pack in 2015, for exercises, stories and nature connection. With my drama background mainly having involved working indoors, the work Ben had already done to try and test ideas was hugely useful to me in planning and I’ve really appreciated his support and wealth of knowledge to draw on.

Now as we head past the midway point, I hope we can continue having fun in the winter cold and spot a few more rainbows on the way. 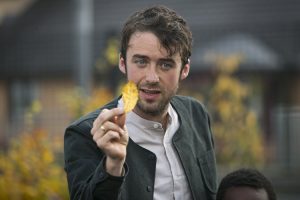